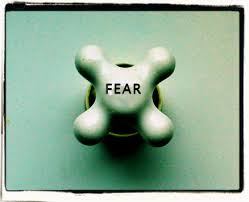 It is a human assumption that fear as a motivator for change has a high probability of success and that somehow we can ‘scare’ people into change.

I believe, it’s a military-type mentality for change, that making someone fear repercussion, means they will change a habit or something within themselves.

This military-type thinking never really went away, and thus we are still left with remnants of a broken follow-the-leader mentality, as opposed to a co-operative mentality.

I’ve had a few coaches over the years and heard many the motivational speaker or self-help guru talk about how, ‘fear is a powerful motivator,’ when in essence it’s a terrible motivator, at least for the long-term.

I can tell you that I had infinitely better experiences with the coaches and mentors who didn’t try to scare me into change, but rather helped me realize the change for myself.

The most important thing there though, is that the change lasted!

No where have I been able to find good data to support the assumption that fear is a good motivator for anything other than short-term problems.

It kind of seems practical, why wouldn’t human beings do something to move them away from their fears?

It may stem from the simplistic view point that human beings essentially change to move towards pleasure or away from pain, but I believe it’s much more complicated than that.

Obviously we don’t do things just to move towards pleasure or away from pain, quite often the most substantial life’s work is done in a constant battle moving towards pain or away from pleasure.

We also appear to rely on hope, social acceptance or rejection, consistency in our actions, aesthetics, satisfaction, amusement and a slew of other factors to establish our own motivation.

Take a close look at the lives of Nelson Mandela, Martin Luther King or Gandhi.

Very little about what they stood for was an attempt to move towards pleasure, but rather away from it, they all knew that they needed to challenge a conventional view-point in order to facilitate change.

They needed to ‘go against the grain,’ push through pain to achieve pleasure for future generations.

Only one of these men ever truly experienced the benefits of their life’s work, they believed in a greater good and because of that, you and I now, know of them.

It’s been shown numerous times actually that people make better, more long-term changes, when they move towards positive intrinsic values/beliefs, instead of moving away from the fear of punishment.

Yet, we all are somewhat guilty of this course of action, when trying to help others change.

In the 1980’s, a GM auto factory in Fremont, California had immense worker union trouble.

It was notorious for a bad working environment where 20% of the work force regularly did not show up for work, and the 80% who did, were very bitter and worked away mindlessly with a huge percentage of defective cars reported.

As this problem made headlines, GM took efforts to modernize the facility and reduce costs over the course of several years, yet ultimately, GM still closed the plant.

In other words, even though tremendous fear was evident in that GM would have to close the plant due to poor production quality and high costs of production, the workers still produced crappy cars and didn’t show up to work.

Foremen trying to instill fear in their workforce probably only made matters worse.

That is until Toyota swooped in from no where, built a new company, — affectionately referred to as Nummi — saved the work force, increased profitability, reduced absenteeism from 20% to 2% and dropped the number of defects significantly.

That is to show that fear was never needed to achieve success in the Toyota Model, even when dying was not affiliated with change.

Co-operation was a key ingredient to Toyota’s success.

In 2002, the United State Justice Department published a study after tracking 272,111 inmates upon their release from prison in 15 different states.

The results are not really that surprising, in fact, most of you may already know that 30% of former inmates are arrested again within 6 months and another 67.5% end up in prison again within 3 years.

One would think that the harsh reality or fear of ending up back in prison would serve as a powerful motivator but this is quite noticeable, untrue.

The point is there is very little scientific or anecdotal evidence for that matter that fear works well as a motivator over the long-term, even in life or death situations.

This is nothing new, just something no one really talks about.

Take it into consideration the next time you think about scaring someone into change, even yourself.

How to Safely Get Started With Exercise - Part 2 Resistance Training

This is a step-by-step guide for safely integrating resistance training into your exercise schedule.
Aug 19, 2019
46 min read